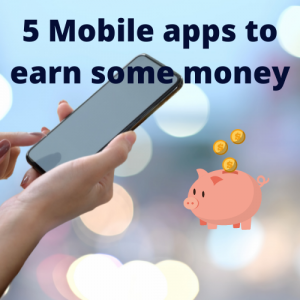 There are lots of great ways to make some extra money online in your spare time, and there is nothing easier than doing it through mobile phone applications that you can carry with you all day, and squeeze in during your spare time.

I am often on a mobile app to make money whilst commuting or stuck In a queue at the post office. There is a wide variety of different types of apps as well. So for this post, we have taken a smattering of different applications that will boost your income

My oldest money making method is through surveys and there are a couple of apps that are great for surveys, there is a big variety of survey apps out there and to be honest from my experience the vast majority are incredibly frustrating and not really worth the time for doing, that being said there are some exceptions to the rule.

QMEE is a great app for making extra money, there are often a lot of surveys throughout the day, it is probably the provider with the most regular surveys. The surveys on the app are always mobile compatible as well. 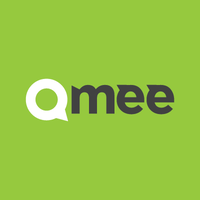 What I like about QMEE is that the surveys tell you how long it has taken other people who have completed it. So the time they give for the survey is quite accurate. To see how long it should actually take you. I also like that they block certain surveys if they are seen to either be asking for information that they shouldn't be or they are kicking out late in the survey, so make sure to use the report buttons it will help tidy up the platform.

A lot of their surveys are not worth the time, anything that is 19 minutes for 24 pence is really not worth your time, but just avoid these and focus on the ones that are worth your time. Also, it has to be said that there will be a lot of screenouts as well, but normally very early in the survey.

Also on the mobile app, you will have the chance to earn more money, through their cashback and deals page, which are either money off deals or cashback deals which like all cashback can take a while to go in, but definitely tops up your money quite well.

Linked with the browser extension on your desktop, you can earn money from completing searches as well as further surveys, I have seen people say they have earned £100’s a month from QMEE, I think if this is accurate then what they are doing is every little last survey. (Maybe with a better demographic), but it would be hard to hit that target each month. But my personal target is to try and get £25 each month. But I will still stick with only the surveys that are worth my time

They do also offer an unusual referral bonus, not everyone has the opportunity to refer but normally doesn’t take long to get to this point, once you do you can decide which link you send to your friends £1 for you, £1 for them and you get nothing, or 50 p each.

The other great thing about QMEE is the payout, unlike others, QMEE will pay you to a linked PayPal account, and the money will go in instantly

It is one of my favourites because of the consistent earnings, in 2020 QMEE netted me an impressive £285.84, and up to end of JULY 2021 have earned £93.11 – averaging £13 a month, this is likely because I have dropped off on my QMEE work as it just has not been worth my time as much,(the next app may show why). But for the time put in is a good way to top up your money.

One that is definitely worth having on your phone. 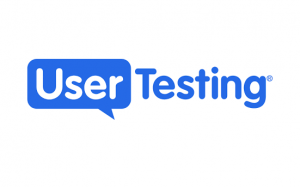 The app name gives a little clue there doesn't it, but the 'user testing app is brilliant and one of the few user testing options that are available to do on the comfort of your phone.

User testing is where you get to check out sites and apps and talk through your experiences out loud, whilst being asked written questions, to give your feedback on the usability of such websites and apps.

The best thing about these is that they don't tend to take very long and they pay really well for the time.

So you will want to sign up through the desktop and check out the studies on there as well as there are a lot of studies that aren't suitable for phone, but a very regular amount that crops up on the phone. Check the app regularly throughout the day.

There will be a few short screening questions then you can partake in the test, they will ask you to share your screen and mic, and you chat answering the questions.

Make sure you have some privacy while you're doing it and there is not too much background noise whilst doing the studies, so maybe not for one on the train.

But that being said the studies don't tend to stay around for too long so I have found myself doing them during my tea break hoping nobody notices me chatting to myself. (fortunately, this is one of the least strange things that I do at work) so nobody thinks twice to be honest.

Their payment is normally $10 as standard for the mobile app tests (more for the online bigger tests) and would say they normally take 5 minutes, much better rate of pay than surveys

The studies are reviewed before payment is made, but you are paid through PayPal within a couple of weeks.

We are 8
Available on app store and google play 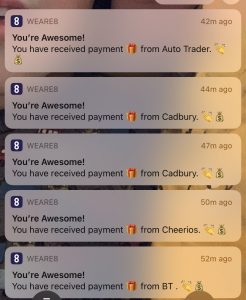 A change of pace now with the next app, this one is a little different but very good for having on your phone won't make you as much money but I like it.

Essentially it is an app that you get paid for watching videos on your phone answering literally just a couple of questions.

So by watching some quick 20-30 second adverts, you will get paid between 10-30 pence as well as ensuring some money is donated to charity

It really is that simple

Once the video has been watched the money will be pending for 30 days and then after storing up a quid you can send that money to PayPal.

Another change of pace with this one 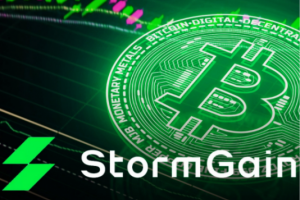 Storm gain is a crypto trading platform - but they have a rather cool feature that I hope in time will turn into some decent money.

As part of their app, they have a cloud mining platform whereby clicking on the button every 4 hours you are 'mining' bitcoin - it is a very small amount you will get but could get 10 USD every couple of months.

It won't drain your battery at all, the thing that appeals to me at the moment is that hopefully with potentially still early days in the crypto world, this fund could grow.

It may not be for everyone as is not quick money, you have to get to 10 USD before you can turn it into USDT and use it to trade with, but to 50 USD worth before you can withdraw.

But with no upfront cost and no detriment really to you other than clicking when you can, you could be topping up your future bank balance.

That is at least my dream

Then lastly another little app that I am fond of on my phone, is shoppix.

This one you can get paid cash for your shopping receipts from lots of places supermarkets, clothing retailers and fast food and restaurants, also can email your online shopping receipt for further points as well and can earn extra points through their surveys which are more regular as well.

As well as that get a scratch card for surveys or receipt uploads which give further chances to win as well.

You get 25 points for each successful receipt upload (5 points extra if done on the same day) – and can redeem £5.00 PayPal for 3200 tokens so works out at about 4 p for each receipt with lots more ways of earning points.
Sign up here

Check out some other Receipt apps here

That is a selection of the apps that you can have on your phone that you can use to earn some extra money, I have tried to give a good variety to show basically there is money everywhere.

Always on the hunt for new applications as well to pass my time. and flit between lots of others as well, so will likely be back with more.

But pop in the comments what you thought, any questions and importantly what apps you are using, so I can steal it and start earning more money.

Thanks for reading as always - go earn that money

too slow for the latest Learn and Earn Campaign, new to CAKE DEFI - but looks like more is on the way!! https://cakedefi.com/?ref=919426