At the beginning of 2021, when on the hunt for more money-making adventures and about the time I started to actually use my twitter account, I stumbled upon a few accounts on twitter, that were talking about Lego and how to make money from ‘investing’. Now I am a curious soul, so I delved into it a bit more and there were some clear principles as to why this was a viable investment  option and one that looked a much safer investment with fantastic high returns. 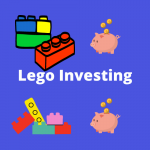 So as with absolutely anything in my life, I made a spreadsheet for it and to see if the numbers were correct, looking at a variety of sets over the years, and see the change in price. From my own research and looking at the principles set out from people on twitter and YouTube videos. The numbers told me one thing that this was actually a viable option.

I told my ever-suffering girlfriend my plans, and she was unsure to say the least, supportive to a point, but then the immortal words of “well you aren’t keeping them here”. For a few days I thought this was the end of it. Until in the midst of lockdown my parents showed up to deliver a care package over the garden fence. I am pretty sure it was my Dad that mentioned investing first, he had plans to put money into a classic car, build it and sell it. So was automatic that I mentioned my Lego research, and how I thought about dipping into the minefield, but limited as to what could store in my attic.

It was refreshing to hear his response, as still 9 months later any one with whom I have told about why I am buying Lego all the time, my Dad was the only one who didn’t look at me like I was a simpleton, and instead asked a lot of questions. We spoke about it for the next few days. Showed the numbers and he went away and did his own research, came back to me after a few days before already saying I could store them in their house, that they were now rattling around in, but also that he was interested as well. 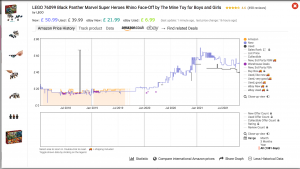 What happened over the next 24 hours was myself exchanging lots of messages ensuring the strategy was explained, that I was not 100% sure it was my punt, didn’t want him losing money, that we would need to hold for a couple of years probably before saw any return. All the risks that I could think of at the time. But he was still in, this was nice in itself as we had something to bond over a bit. At time of wrtiing I think of the stock bought so far he has bought 75% and myself 25%.

I could probably put more in but wanted to diversify so some money has still been invested into my LISA in order to get closer to that house in 2 years hopefully, and also invested a bit more into crypto currency on a regular basis.

The principles of Lego investing

There would be a number of things that I would do differently on our Lego purchasing journey if I knew what I know now. But that is just how it goes sometimes, and to be honest is probably the best way of learning. But ultimately, I have followed the same principles that I have learned from the start of the year, that has helped me be comfortable in my Lego investing journey.

This is one of the main reasons why you can count on your Lego investment to go up, it will always retire. The shelf life of a particular set of Lego is not guaranteed, all sets retire at different stages, but you can look at the trends and most are normally 12 – 24 months. Meaning that once a Lego set does retire, it will become more sought after, there will be less sellers and retailers will be out of stock and you will be able to see a great return.

As always there are some exceptions the millennium falcon for example, or the London bridge

Another principle of Lego is that the majority of sets will be discounted at some point, either online or in store, and you can pick up Lego sets well below their RRP. I have bought some sets for 50% off this is then really easy money, the sell price to hit your profit margin is so much easier after you buy it discounted.

Different sets will have different discounts, when starting a lot of people were suggesting 20% sale is good, and for some sets harry potter and Star Wars they were probably right, but for someone with a smaller budget who isn’t going to buy every deal. 20% off was not the right approach. If starting over again there are some deals, I would now pass on and wait for.

But for those popular sets, potter and Star Wars I wouldn’t expect 50% and likelihood is 30% would be a fantastic price. It is probably also worth saying that those sets probably stay out for a bit longer as well.

So, if a Lego set is popular it stands to reason that it will remain popular past it’s retirement, so buying these sets discounted will pay great dividends in the future, Certain themes are certainly popular than others

Then seeing the popularity of the specific sets will ensure your making good buys, you can check these on amazon by looking at the BSR, and the number of reviews, or if you have Keepa premium you can look on there.

Patience is the key

Patience is definitely the key with Lego though, there are probably some sets you can ‘flip’ for small profits but not guaranteed, the secure investments are once they have retired, and although it will it may not be as quick as you like

When I started my purchases, I came to the conclusion that I wouldn’t sell within the first 12 months – 24 months. If you are still happy with this before your purchase, then you are making the right call. But it is called an investment for a reason it will take time, that being said you have a ROI in mind take it when you can you may be waiting unnecessarily

Despite my theory that I wouldn’t sell anything within the first 12 months I have actually sold some bits 6 months after purchase. Two different sets so far that I had in my attic I have sold

And 71711 I bought for 19.46 on amazon and then sold on amazon making 90% profit on two sets, less on the third because I made a mistake and allowed my purchase to be bought in Ireland. This will likely be my next post to avoid this easy mistake for anyone trying to sell on amazon.

I could probably have made more money with these sets had waited a little bit longer (I think) although I see others, I am walking into the unknown my personal target was 100% ROI, which minus poor calculation on the amazon ones I should have been able to achieve.

But every day is a lesson, still we have made money which is the positive thing, also made mistakes that we will not replicate. There is much more to come. My plan (hopefully) house savings permitting, is to keep flipping the Lego money to build and build over the next few years, (that is if my son doesn’t find it all and builds it first.

Thanks for reading as always

There will likely be much more of my journey to come so stay tuned, follow me on twitter to keep up to date

For my first blog entry check out what brought me to this novel way of making money and many others. 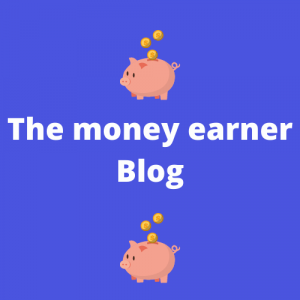 The monthly add up has been done.... £589.55 from random things, much more room for improvement, but good top-up to the house fund! https://themoneyearner.co.uk/november-earning-report